It was a beautiful day for a peaceful Rally. I was so happy that of all the people I spoke with, I did not encounter a single “cop-hater” there. People were friendly, and only interested in justice and change to prevent this heart-breaking tragedy from happening again.

Peaceful protesters gathered Saturday in opposition to the recent killing of a family dog by police.

We are told in several statements that Officer Woolly was given permission to ‘euthanize’ the dog, not because it was being aggressive, but because she couldn’t be captured and the owner couldn’t be located, even though we’ve seen no evidence of any attempt to locate the owner. It seems unlikely any attempt was made when a neighbor pulled up at his home next to where it happened minutes before the dog was killed. By the officer’s admission in his report, the dog was not being aggressive, and so he would have had plenty of time to ask this witness a simple question, “Hey, do you know where this dog belongs?”

As far as the claim that Cali was ‘previously’ aggressive, those making the claims now, after Cali was killed, knew who Cali belonged to. If Cali was truly a dangerous dog, one would think they would have made the claims when Cali was alive so that the owner could have been warned, and took better measures to make sure Cali couldn’t escape her fence. It indicates to me that they didn’t ‘really’ believe Cali was a threat.

Back to the “permission” that was given to kill Cali. I’m not an attorney, and I could be wrong, but I think it’s unlikely that officers can be given permission to do something that is unlawful. Oklahoma law treats dogs as personal property. Cali had a collar on (that if you believe one witness, Officer Woolly thought it was “awesome” to see fly off when he killed her), so he knew she was the property, or pet of someone. The willful taking of property, which the statute specifically includes dogs as property, is larceny. That’s just one of the laws I would be breaking had I killed Cali (unless she was attacking me). The other one is in Title 21, Crimes and Punishments. Section 1685 makes it unlawful to shoot a dog. This is considered animal cruelty by many, and I’m not allowed by law to shoot even my own dog.

Several officials have asked me, “What do you think the public would say if we did nothing and Cali bit someone? Do you just want us to wait until a dog attacks someone?” Is this their new protocol? Shoot any dog that can’t be captured, because it could “possibly” attack someone, and the public wouldn’t like that. If we accept this new standard, it stands to reason that we will see a rise in dog killings. The little that we can do, in the form of rallies, protests, phone calls, complaints, etc… may be enough to shine a light on what would have been swept under the rug, and make a positive change.

Discharging a weapon in a densely populated area cannot be proper protocol, when a dog is not threatening anyone. No one was in danger at the time, but was put in danger when the officer discharged his weapon. Several years ago, in Noble Ok, an officer killed a five year old boy fishing in a nearby pond with his grandfather, when the officer shot at a snake in a tree. I don’t believe most of the citizens of Ardmore are okay with officers discharging their weapons in neighborhoods over animals that aren’t being aggressive?

If they truly could not catch Cali, or locate her owner, what would be wrong with tranquilizing her and taking her to the pound? Then Sarah would have found her, been given a ticket and a warning, and could have sent Cali to live elsewhere or built a better fence. It the owner does not show up to claim the animal, and the animal is not adopted,  the shelter then properly euthanizes the dog in a manner that is not dangerous for our neighborhoods. 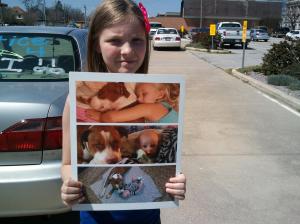 A young protestor holds a ‘Justice for Cali’ poster

This kind of thing is happening more and more across the nation. We may not be able to do anything about it in other towns, but we can here. We are not helpless. Many people are supporting Sarah and watching Ardmore’s reaction. Let’s show the rest of the Country that our officers won’t be allowed to kill our pets for no good reason, and they certainly won’t be allowed to describe it as “awesome.” Like Justice for Cali for updates.

2 thoughts on “Peaceful Protesters Gather at Ardmore Police Station in Support of Justice for Cali, Dog Who Was Shot by Police”