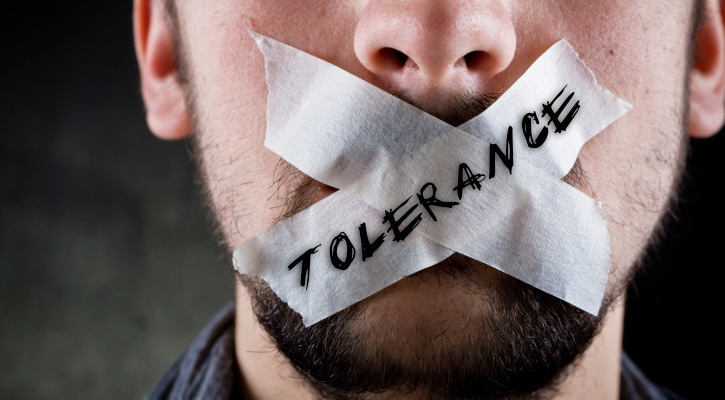 (Or, Why We Need More Complaining, Shushing, Honking and “Come-to-Jeebus-es” in Public)

Tolerant of what? –Muslims? Homosexuals? A differing view?– or people shouting obscenities and wearing pajamas in public (while barking into a phone in a checkout line)? Are we to tolerate mere matters of opinion or matters of principle, too? Are we to tolerate the subpar and the overreach at the expense of understood standards of quality, decency and consideration for others? And what for?

Does the gravitational-britches-wearing-loudmouth in the frozen foods section really need (or even want?) a seat at the table of civilization? I think not. There is a good (and just) reason why some are in the minority, and it is a good thing for them to go on being unrepresented, let alone under-represented. (Of course I’m talking about the people and abuses and situations EVERYONE despises, not the unfair treatment of foreigners, the benignly odd, unusual or simply outnumbered, all of whom deserve our respect and common courtesy.)

Tolerance has been packaged, marketed and sold to us as a good thing – as something we ought to work up for peace and harmony in our community and the world. But that’s not what tolerance does. Tolerance ALWAYS has to do with pain. Either the pain of loss or sacrifice (of something good) or actual physical pain. It does not make us stronger either. Not only is the  expression, “what doesn’t kill us makes us stronger” not found in any holy scripture, it is not true. Harder, more jaded, more miserable and resentful does not equate with strength, but rather, the opposite. And pushing tolerance or telling people what to/not to: do/say/think apparently only has the undesired effect of making us all hate each other and boiling mad.

Simply put: tolerance is bad for humanity. What are people really getting at when they beg (or bark) for tolerance? If we peer a bit deeper into what is lacking, what is meant, we may see the heartbreaking reality that what such people are really asking for themselves or on behalf of others -is something much less than the love and respect we all desire and expect. Tolerance is the admission that something or some behavior is subpar, that despite the pain or destruction or unpleasantness it brings, it hopes to be ignored, subsumed into a passive “greater good” mentality that not only marginalizes it, but treats it as though it never existed, with the only evidence of its being a pat on the back where another just stabbed.

Is tolerance anything more than an elaborate excusing of bad behavior in cahoots with a treacherous aversion to doing anything about it?

And can we truly love and respect one another (let alone, offer mercy, kindness and forgiveness to rowdy peace-disrupters) through layers upon concrete sublayers of politically correct chat? No, we cannot. And further, is it fair to lump peaceful people who mind their own business (be they muslims or homosexuals or people of any and all skin-tones and income levels) together with all the gross-horror-instigators of sensationalized history, contemporary fanaticism and popular fiction? Of course not.

What ends up happening when we “tolerate” is an absolute reign of nonsense. All peaceful people are subdued with new rules and regulations that are supposed to sift out the terrorizing haters, hijackers and hackers amongst us. People who were already loving, respecting, minding their own business are gradually forced to downgrade to tolerance and mind everyone else’s business, too, with no opting out.

How is this better (or more cost-effective?) than subtly honking a horn or raising an eyebrow? To be sure, it is not; however, it does “create jobs” for the unproductive, the hopeless, and the misguided martyr. Not only that, it creates degree programs, private and public grant initiatives, tax incentives, organizations and whole communities of unproductive, hopeless martyrs. It is true what they say about misery…it is worse when they think they ought to be in charge, too.

Do not think you are being difficult if you raise your voice to complain of pain, injury, nuisance, tyranny, injustice, ill-treatment in an open forum to someone who can do something about it – or better! – if you yourself rise up to be the one who does something about it: run for office, get directly involved in a process, be the persistent widow to your local and federal legislators, challenge the status quo, ignite a philosophical revolution, invent something that solves a problem…There is an important difference between complaining and just bitching. One requires some ownership and leadership, the other needs only an audience. Are you using your power and intellect to affect real change – or are you just throwing bones to junkyard dogs? Technology has given us more of a general audience, when what we really need is to connect with certain conduits of power – and doing so, to this day, requires actual relationships.  If we allow systematic blockage to these doors and windows of communication, of being seen and heard, we shall all be buried alive. And by our own doing – or notdoing.

What does it matter if we all get along in hell?

Before there was “tough love” and “constructive criticism,” there was diplomacy and hospitality, which were freely offered on a basis of common courtesy. To not be courteous was uncommon because there was a standard at work in public life that attached judgements and stigmas on behavior to the contrary. In shrugging off these judgments – not mere personal prejudices or preferences – but time-honored principles of right and wrong: what works in civilization and what invites barbarians to invade – we leave ourselves vulnerable to the very fears of our time: terror, violence, hate, greed, economic collapse, tragedy…

Only we the people, as private individuals, can dig ourselves out and rise with banners waving that there is life and liberty and happiness still to be pursued. We are the standard bearers. Like singular pools of magma beneath the ground, we must become active and blast through these old broken down roads paved with good intentions. For the sake of all that is honorable, we must speak, we must lead, we must honk, we must glower.

And above all, we must not stop or become contented with preaching to a choir of cynics damning the future or one of mystics waiting for its savior. We are the ones here now. We are it. It is our turn to lead. It is our life to live. It is our time to say so.