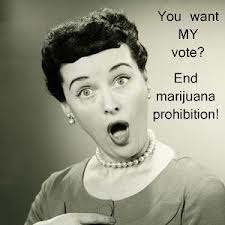 I certainly do not claim to be an expert on this subject, however I find the topic very intriguing on several levels. Its medicinal benefits, the origin of its prohibition beginning in the 1930s, the economic and political aspects of its prohibition including industries that benefit financially from its illegality, the influence of law enforcement/prison for profit industry, the history of its use both medicinally and recreationally predating the 1930s “Reefer Madness” propaganda campaign…cannabis is a very complex and interesting topic.

The more I learn, the more I am prompted to speak up on behalf of repealing prohibition. And so that’s what I have been doing recently.

As soon as I began sharing my views publicly, numerous people suffering with various health conditions began reaching out to me privately, desperately seeking allies in their fight to end prohibition in Oklahoma so that they can treat their afflictions legally. Since there is such a stigma attached to cannabis use, many are reluctant to speak out. Some even fear that simply requesting this treatment from their doctors could put their jobs and families at risk.

A sampling of folks I have spoken with recently include: the family of a police officer who was severely injured on the job and whose government approved medical care and pharmaceuticals have not improved this person’s health at all, but instead have created a whole host of extremely negative side effects rendering this person practically incapacitated; a veteran suffering with PTSD who would rather let his PTSD go untreated than to risk the dangerous side effects, such as suicide, of his doctor-prescribed pharmaceuticals; a young woman trying to get off of her prescribed serotonin-norepinephrine reuptake inhibitor (anti-depressant) due to the side effects she was experiencing; a home schooling mother who suffers from a rare condition which cannabis has proven successful in treating – but she cannot legally obtain this treatment in OK and her health has drastically declined as mainstream American medicine has given her no relief at all.

It’s time to lose the stigma. These people are not wannabe stoners. In fact, these particular people all happen to self-identify as conservative Republican Christians. They are your friends and neighbors. These people have the natural right to pursue the medical treatment of their choice and it is time for the law to reflect that rather than serving as a source of violence against those who would dare seek proven treatments that are legal in other states and had been legal all over until the 1930s.

Plus, as shocking as it may seem, I have also encountered people – again…conservative, responsible, hard-working Republicans – who admit to using cannabis simply to relax, take the edge off, or alleviate minor yet chronic pain. In other words, there are regular, upstanding people all around us of all ages who use cannabis recreationally and responsibly, much like many of us enjoy wine or beer at the end of a day or in a social setting. The stigma that people who use or advocate for legalization of cannabis are ‘liberals’ or ’stoners’ does not take into account reality.

Additionally, an alarming trend is the increased use of legal psych-meds which are typically, but not solely, prescribed by doctors and typically, but not solely, dispensed at local pharmacies. Of course, they can also be purchased through street dealers. These synthetic drugs can be highly addictive and extremely dangerous to the user. Abuse of and addiction to FDA approved pharmaceutical drugs is becoming increasingly rampant and the number of people who are legally prescribed psych-meds is on the rise. Often in the case of acts of mass violence, the perpetrator had a history of using prescribed psychiatric medications. Have you ever read the warning labels on some of these meds? Risky, even under a doctor‘s care.

In contrast, centuries of countless cannabis users from time immemorial have not/do not resort to committing violent crimes nor turn into crazed druggies – no more than people who drink a beer now and then become violent alcoholics, ax-wielding killers, or strung out drug abusers. It is common knowledge that no one has ever died from an overdose of cannabis and people do not become violent from its use.

What is the legitimate role of government on this issue?

Many substances and behaviors can be abused and people who are prone to abuse them will find a way to do so one way or another. But does that mean government should ban products on the basis that they may potentially be abused by some in our society? Of course not. In a free society, people are free to make their own decisions, even if those decisions may be unhealthy. And in a free society, people who have not committed acts of aggression against others should not be languishing in prison when they could be out in the workforce engaging in market transactions that benefit society rather than draining the taxpayers!

It is the epitome of nanny state big government to have laws that restrict what grown individuals can ingest or inhale when no crime or aggression is even being committed against another’s person or property. Advocating for government intervention in such personal matters is not conservative! Micromanagement by government is collectivist and progressive! It may sound outlandish, but if not kept in check, the next thing you know governments will start limiting things as basic as salt in an effort to “protect” us.

Now, if the anti-cannabis people were consistent in their views – like if they also advocated for reinstating alcohol prohibition – they would have some credibility on this issue. Until then (well, even then), it’s just one group of people imposing their preferences and propaganda-based beliefs on others. And that is a very un-Republican, anti-individual thing to do!

Interestingly, the more I speak with others about this issue, the more people I discover who also hold a positive view of cannabis. And guess what…the Republican party in Oklahoma is teeming with them. So let’s all start working together to educate ourselves and others and promote rationality and science over fear-based propaganda. It’s time Oklahoma.

5 thoughts on “Confession: I‘m a Conservative, Christian, Home Schooling Mom and I Support Legalization of Cannabis”