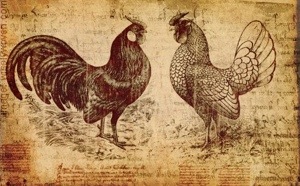 There are some people in this world who desire independency from the ‘system’ – the system being that which is supported by taxation, operates via coercion, and thrives on conformity. These people might be considered ‘rebels’ who reject and resist involuntary participation in the system. Maybe they want a simpler life while living within their means. Maybe they want to decrease their grocery bill or improve their health by growing their own food. Maybe they just want farm fresh eggs and vine ripened tomatoes. Whatever the reasons, methods, and motivation, there seems to be a growing movement and resistance is fertile.

Liberty on Tap’s gathering for August hosted folks who are on various paths of self sufficiency. Our main speaker was Bill Francis of Stoney Creek Heritage Farm. He shared with us information about what is considered heritage and the things he raises on his farm such as poultry, rabbit, and vegetables. We could have easily spent a few hours talking with him about his farm.
To learn more about Stoney Creek Heritage Farm like his Facebook page.

Pete Banks attended and gave us information on his adventure of transforming 78 acres into a permaculture paradise.
You can read more about it here.

Heather White shared her family’s experience living ‘tiny’. They now have two small buildings installed and are preparing for winter as they implement plumbing, electricity, and winterizing their spaces. You can follow along on their journey at her blog.

Charlie and Julie Henry live in the heart of Oklahoma City virtually off the grid, growing food, and raising chickens. You can check out their videos and blog here.

Some of the attendees are doing similar things such as raising backyard hens, bees, goats and making cheese. Some of these people trade with each other nurturing a network based on voluntary interactions that benefit all who are involved.

We enjoyed this topic and thank everyone for coming out and sharing their stories.