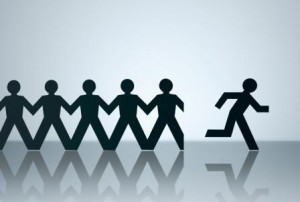 Another decree issued by the king of the USA regarding amnesty for illegal immigrants has once again ignited much debate amongst the people. On one side, the issue is the whole legality of it. People crossing imaginary lines into the US of A “illegally” really bothers some. I began to break down what it means to be a “legal” citizen. After exploring this more deeply I have to question why anyone would want to be a “citizen.”

I have found several websites explaining how to be a good citizen and what a good citizen does. They are dripping with creepy collectivist propaganda where being a good citizen is directly related to government activities such as voting, contacting legislators, and working for the “greater good”. It means being a good, obedient subject in the collective.

According to the government’s US Citizenship and Immigration Services website –

“Deciding to become a U.S. citizen is one of the most important decisions in an individual’s life.

If you decide to apply to become a U.S. citizen, you will be showing your commitment to the United States and your loyalty to its Constitution. In return, you are rewarded with all the rights and privileges that are part of U.S. citizenship.”

Here is the oath taken for those who choose to be “legal” citizens.

In other words, by taking this oath, one promises to submit to a ruling class, declare loyalty to a tyrannical government, and agree to commit murder for politicians. In exchange, one is given rights and privileges as rewards for his servitude. These are the same principles propagated in impressionable young minds in the public school system.

What does citizenship mean for “natural born” citizens? “Natural born citizen” is not defined in the Constitution, as if it would have any legitimacy even it was. It means that those citizens born on the plantation are automatic subjects. They are forced to take a tracking number and fund the immoral institution with the stolen fruits of their labor and are expected to feel a sense of great pride by doing so.

I would like to make very clear that I declare no loyalty to a piece of dirt, a flag, or slimy politicians. My existence anywhere on this planet should not be dependent on loyalty to anyone or anything. I own myself. I represent myself. I deserve to live free. We all do. I didn’t swear an oath and agree to serve a ruling class. I was forced into it.

I once shared some of the mainstream ideas on this issue. I continue to de-program and de-bamboozle myself, peeling away the layers of indoctrination. Turning off the propaganda box (TV) and infotaintment channels was a great start.

My conclusion: Citizenship = Subjugation by a parasitical ruling class.

Thanks. But no thanks. Where is the Opt Out button?