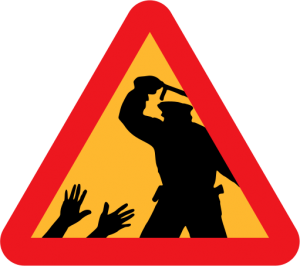 Abuse and killing by cops seems to be increasing or perhaps these incidents are just being exposed more thanks to technology. Here in Oklahoma we have had our share and the most recent incident involved a reserve sheriff’s deputy who shot a man. The reserve deputy claims he thought he grabbed his taser but instead he grabbed his gun “by mistake”, fired and then said, “I shot him! I’m sorry!”. Another officer was on top of the victim with his knee in the back of the victim’s head and while the victim pleaded that he couldn’t breathe, the officer responded with “F—k your breath”. The victim, Eric Harris, died from his injuries. This was a sting operation where the state agents set a man up to buy an “illegal” gun from him. The man ran, was apprehended and face down on the ground when he was shot. Read More.

This story is nothing new though as there are daily reports of cops pointing guns at innocent people, mistaken identity cases, maiming babies, roadside sexual assaults, and shooting dogs. People often say there are a few bad apples and that not all cops are bad. It really isn’t so much about good cop/bad cop. Cops are employed by the state. Their salary is paid by the theft of others. They are held to a different standard than “ordinary citizens”. They are given the authority to initiate violence upon others, something you and I do not have the right to do. If we do not possess this “right” ourselves, then how can it be delegated to someone else?

When employed by the state, they are also offered protection under the state. An “unfortunate incident” involving death or injury by cop would be a crime if committed by you or me. Though there are a few cases where criminal charges were imposed, most of them end with an internal investigation where they found themselves justified in their actions.

Do all cops do this? No, but they can. There is a common belief that cops are employed by the people to protect and serve the people. This isn’t exactly true. The money used to pay them certainly comes from “the people” but they are not employed by “the people”. Try firing one for abusing his position. Their job allows for abuse with impunity. Their “job” is to uphold the law including the unjust, arbitrary, revenue generating ones. This is where they are given the protection to violate individual rights. Shooting a man in the back while he is running away, likely for fear of his life because he was growing the wrong plant, or selling a firearm, or driving with a broken headlight, is not a justified response – it’s a crime. Whenever a cop pulls up behind you, turns on his lights (as his “request” for you to pull over) he is threatening your life. Who has the right to do that? 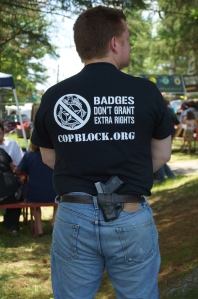 As long as legislators continue to pen laws then cops granted with special, magical powers will continue to violate the rights of others. Murder by cop should not be reduced to an “unfortunate incident” but rather held to the same standards as us “ordinary citizens”. They should be personally liable for injury meaning the state does not pay restitution to the victim, the cop or cops responsible for injury pay from their own salaries, which of course creates a conundrum because their salaries are paid for by the theft of “ordinary citizens”.

It is absurd, really, when you think about it; when a victim of the state is punished for a crime that involves no injury, harm, or theft of another individual, she (and her neighbors) is forced to pay for her own incarceration. If in the rare case she is awarded a settlement she is basically paying herself back (and so are her neighbors whether they want to or not). There is no personal responsibility or restitution in this system.

Many say that cops are held to a higher standard because of their positions. When in reality they are put on a pedestal as if they are greater than “ordinary citizens”. They are appointed an illegitimate role of authority delegated to them by a group of people whose very positions are supported by the theft and violent domination of others, which is a crime in itself.

The essence of the State is not merely aggression per se, but legitimized aggression– and THAT is what makes it a particularly dangerous institution.”~Liberty Veritas