If you don’t vote, you can’t complain and voting is your voice ~

Today I saw many people announce that they had “used their voice” by voting and that they had been taught (and teach their kids) that if they don’t vote, then they can’t complain. Well, that’s one view. I have another.

Today I told my kids that whether or not they vote, they MUST complain, protest, speak against, thwart the efforts of those who would use the ring of power via elected office as well as those who would wield power through bureaucracy and the state’s enforcement apparatus if they really want to improve society. They’ve heard me say it over and over: You don’t need to vote to make a difference and voting is not your voice. And they have watched me engage in hands-on activism of all sorts.

While many of their peers are being taught that they were granted a voice by a government document and/or government agents and that they should “use their voice” by quietly and obediently filling in a little rectangle with a black mark, I told my kids to defy the status quo, go beyond the prescribed “solutions”, and utilize instead the art of persuasion. In other words, I told them to use their ACTUAL voice to bring about change. I told them when they want to express themselves on so-called political matters to think outside the box…that is, the ballot box.

They have a literal voice which was given to them by our Creator who also gave them life. Government agents did not have anything to do with it. I told them that if they want to make a difference, they need to use their voice by engaging in education, dialogue, persuasion, activism, and mindful market choices. That’s how change really happens.

Before what I am saying is misinterpreted, I don’t care if they or the people reading this vote or not. That is not the point of this post (although I can make a compelling argument against voting on moral grounds which I will save for another time). For now I just want to give a giant eye roll to the glorification of voting, to raising it to the level of a religious ritual. It’s not really as effective as the system would have you believe (also another discussion for later).

Today I just want to leave you with this truth nugget: ”I have solved this political dilemma in a very direct way: I don’t vote. On Election Day, I stay home. I firmly believe that if you vote, you have no right to complain. Now, some people like to twist that around. They say, ‘If you don’t vote, you have no right to complain,’ but where’s the logic in that? If you vote, and you elect dishonest, incompetent politicians, and they get into office and screw everything up, you are responsible for what they have done. You voted them in. You caused the problem. You have no right to complain. I, on the other hand, who did not vote — who did not even leave the house on Election Day — am in no way responsible for what these politicians have done and have every right to complain about the mess that you created.” — George Carlin 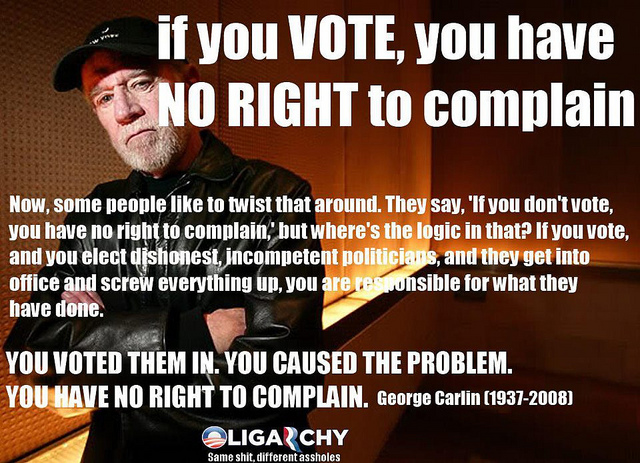 I just used my voice!! 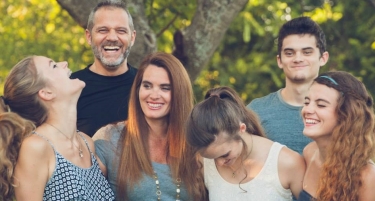 One thought on “If You Don’t Vote, You Can’t Complain…lol, whatever”