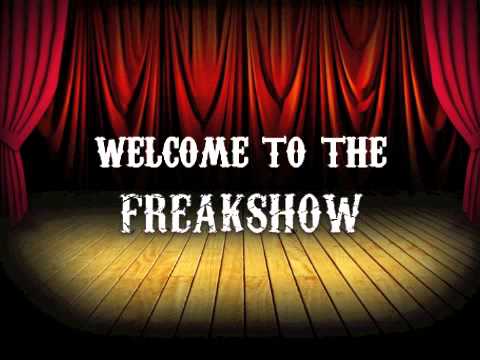 I have to weigh in on this “Clown Craze”. Surely you all have seen the stories about the “menacing” clowns (many unsubstantiated). It finally made news here in Oklahoma.

Not that there have been any actual “clown sightings” (do you laugh too when you read this?) There have been pictures of clowns and alleged social media interaction. Parents are actually concerned that evil clowns will show up at their childrens’ schools and kidnap them. (the new boogeyman – clourophobia) 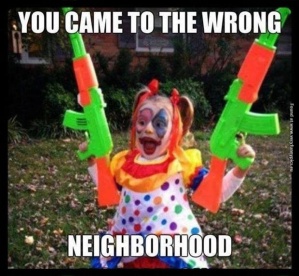 Even more disturbing is the harassment of clowns by law enforcement. Nine people were arrested in Alabama for threats. What were they charged with? Well…they had to come up with SOMETHING, right? Prepare yourself for absurdity.

“Seven, including two adults and five juveniles, face felony charges of making a terrorist threat. One juvenile faces a child in need of supervision charge. And the other, also a juvenile, faces a misdemeanor harassing communications charge from an incident in Rainbow City.” Clown arrests in Alabama

Terrorist threats? And “child in need of supervision”? This article does not explain what specific threats were made. Certain criteria must be met:

“The criminal law is very specific on the elements of the charge. In order for it to be a terrorist threat, the threat has to be made to a school, a building or some functioning location that would disrupt services.”

However, these are felony charges. Sure, people shouldn’t threaten others, but common sense seems to have been disposed of with this clown business.

A Connecticut school district said it is banning clown costumes and any “symbols of terror.”

The media loves fear. It keeps everybody on edge and healthy perspectives clouded. Though, this clown hysteria seems fitting.

It’s only a matter of time before we see pitchforks and torches, (oh wait…[The incidents continue to stack up. Just this week, hundreds of students in Pennsylvania State University swarmed surrounding campus streets to carry out a mass clown hunt]), innocent clowns targeted simply because they look different than others, and retaliatory clown attacks. (I really cannot believe I just wrote that)

By the way, Oklahoma has a jewel of a law regarding masks, hoodies, and masquerading…because freedom –

Universal Citation: 21 OK Stat § 21-1301 (2014)
It shall be unlawful for any person in this state to wear a mask, hood or covering, which conceals the identity of the wearer during the commission of a crime or for the purpose of coercion, intimidation or harassment; provided, the provisions of Section 1301 et seq. of this title shall not apply to the pranks of children on Halloween, to those going to, or from, or participating in masquerade parties, to those participating in any public parade or exhibition of an educational, religious or historical character, to those participating in any meeting of any organization within any building or enclosure wholly within and under the control of said organization, and to those participating in the parades or exhibitions of minstrel troupes, circuses or other amusements or dramatic shows. Any person, or persons, violating the provisions of this section, shall be deemed guilty of a misdemeanor, and upon conviction thereof, shall be punished by a fine of not less than Fifty Dollars ($50.00) nor more than Five Hundred Dollars ($500.00), or by imprisonment in the county jail for a period of not exceeding one (1) year, or by both such fine and imprisonment.

Remember this? HOODWINKED? Crimes of fashion. Some believed that this proposed law was to prohibit people who were demonstrating against the government from concealing their identities, like this: (take that, gubmint!) 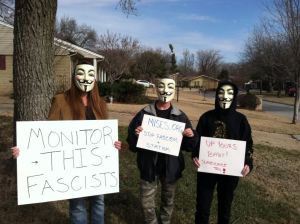 Let’s all just calm down. Maybe focus on the real clown menaces of society. (hint: they hold office in fancy buildings, sponge off your hard earned income, pen stupid laws, perform silly rituals, and pretend to have extra special rights backed with the force of violence). 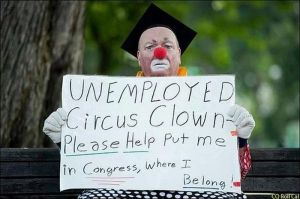 I’m wondering why we are being distracted with all of this. Perhaps we should look behind the curtain. 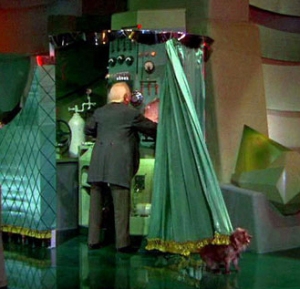